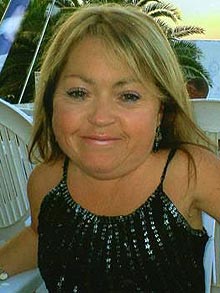 Beverley Burkitt, 45, who has dwarfism, became lost in dense forest while walking with her tiny dog Pebbles on Sunday.

The alarm was raised but she had not been found when night fell, so she lay on the floor and cuddled the dog to keep herself warm.

A search party found her the next morning and rescuers said the dog had saved her from getting hypothermia.

Mum-of-one Beverley said: “Pebbles lay across my legs overnight and kept me warm.

“I wasn’t too worried because I knew I would be found sooner or later.

“I’m very thankful to everyone who came out to look for me.”

Beverley and her daughter, 15, were staying at a pony trekking centre at Dolwyddelan, North Wales, when she went missing.

She told rescuers that she strayed into woodland and then dropped her mobile phone.

A helicopter with heat-seeking cameras was launched and search parties on the ground scoured the area.

But it was not until the next day that she was found after her mobile phone was discovered on a path.

Asthma sufferer Beverley, of Colwyn Bay, North Wales, was found still snuggling up to the long-haired black and white chihuahua.

She was unharmed and allowed home.

Chris Lloyd, of the Ogwen Valley Mountain Rescue, said: “She went for a walk at 10am with her little dog and walked into the forest where she dropped her mobile phone.

“She realised she was lost and just waited.

“Luckily it was quite a mild night and she had her dog to keep her warm.”

Puppies and Flowers : Kitten with heart in fur

Puppies and Flowers : Pig born with love-heart pattern in fur