A judge in India has summoned two Hindu gods, Ram and Hanuman, to help resolve a property dispute. 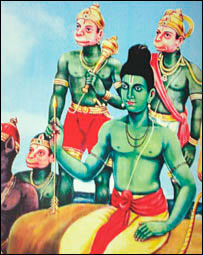 Judge Sunil Kumar Singh in the eastern state of Jharkhand has issued adverts in newspapers asking the gods to "appear before the court personally".

The gods have been asked to appear before the court on Tuesday, after the judge said that letters addressed to them had gone unanswered.

Ram and Hanuman are among the most popular Indian Hindu gods.

Banksy returns to Bethlehem Brain Bag
We use cookies to ensure that we give you the best experience on our website. Find out moreI accept