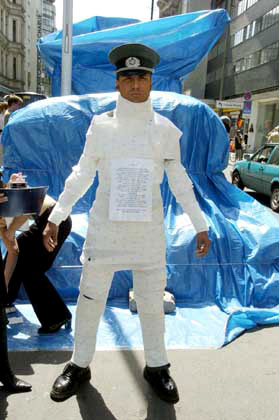 The stripper was Tom Luszeit, a 34-year-old who — for his day job — dresses up in various period military outfits to pose with souvenir-seeking tourists. The widow was Alexandra Hildebrandt, 48, who has run the Wall Museum at Checkpoint Charlie since her husband passed away in 2004. She has taken issue with Luszeit’s antics in the past, in particular with his penchant for dressing in the uniform of East Germany’s secret police, the Stasi. And the court case is one that has gone a long way toward eroding the dignity of one of the Cold War’s central sites — and has yet to reach its conclusion. 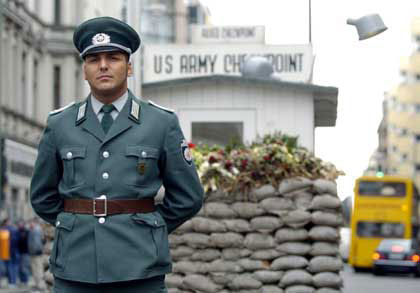 It is unclear who Tom Luszeit will call to the stand to back up his view of what happened in the spring of 2004. But there is at least one man who might be helpful. Three years ago, Gerhard Lindner, owner of a souvenir shop at Checkpoint Charlie, came to Luszeit’s defense, saying he found nothing wrong with his posing as an East German policeman.

But then, his testimony might not be worth all that much. It didn’t take long for Berlin journalists to discover that Lindner himself had worked as a Stasi spy in the 1980s.