Ah the old ‘show me the breathalyzer source code’ DUI defense. Works 9 times out of 10.

Drunk driving defendant says he needs the source code to the Intoxilyzer 5000EN to fight the charges in court. Without seeing the code he claims it may just be a random number generator.

He won the argument. This is unfortunate because typically, CMI, the maker of the Intoxilyzer 5000EN refuses to release the source and the case is subsequently thrown out. like what happened two years ago in Florida:

"Unless the defense can see how the breathalyzer works," the judges wrote, the device amounts to "nothing more than a 'mystical machine' used to establish an accused's guilt.

It appears that CMI will have to comply with the Court order now.

Here is an unrelated but another funny ruse that apparently worked. 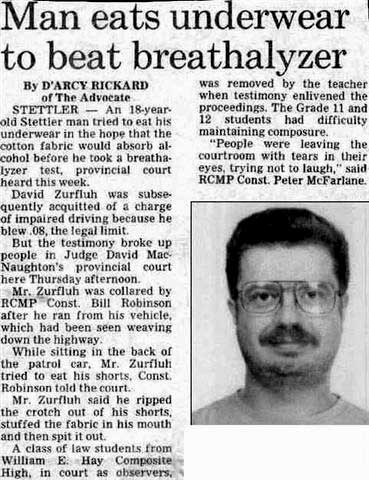