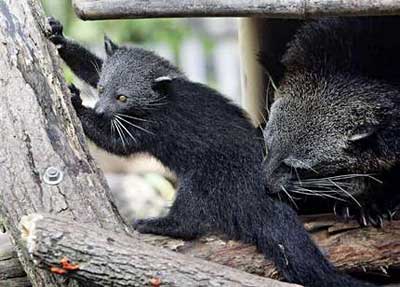 Fueled by her favourite diet of grapes, Taronga Zoo’s new binturong cub explored her enclosure today like a “wound-up toy”. The jet-black cub, named Indah, was making her public debut just one month after becoming the Sydney zoo’s first binturong born in captivity.

The jet-black cub, named Indah, was making her public debut just one month after becoming the Sydney zoo’s first binturong born in captivity.

The tree-dwelling binturongs are often called “bearcats” because of their bear-like faces, shaggy hair, claws and long tails, which they use to cling to tree branches in the dense canopies of tropical rainforests.

In fact they are neither bears nor cats, but a species of civet, and are found in the forests of South-East Asia.

Taronga Zoo keeper Lisa Abra said Indah, which means beautiful in Malay, was adjusting well to her surroundings under the watchful eyes of her parents, Imas and Pepper.

“We’re really happy with the way everything’s going and we couldn’t have asked for a better mum and baby combination,” Ms Abra said.

Ms Abra said Indah had undergone her first veterinary examination and vaccination earlier this week and would continue on a strict diet of summer fruits.

“She particularly loves grapes. Grapes are the best food to manage her and she’s got all her teeth, which are very sharp,” she said.

“The baby is healthy and growing well and developing, so that’s great.”

Binturongs grow to the size of a large house cat and can live for more than 20 years in captivity.

Source. Awww look at the Binturong.