“Don’t piss me off! I am running out of places to hide the bodies.” 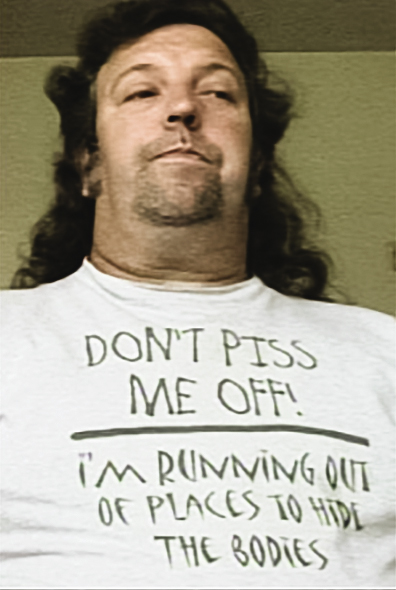 A man spotted wearing a T-shirt bearing an “offensive” slogan in a city centre has been warned he risks an £80 fine if he is caught again. Forklift driver David Pratt was told by street wardens in Peterborough he could cause offence or incite violence.

The slogan on the garment read: “Don’t piss me off! I am running out of places to hide the bodies.”

Peterborough City Council said using insulting or offensive language was an offence, even if it appeared in print.

Mr Pratt, 46, an American living in Peterborough, was approached by the wardens as he waited for a bus with his wife Elly.

“It is insane. I have worn it in the city centre hundreds of times”, said Mr Pratt, whose wife bought him the T-shirt in Venice Beach, California.

“Most people who see it just chuckle. Some people have even stopped me to tell me they like my T-shirt. “We have put this incident online on several blogs and 90% of people who have commented said they found it hilarious or that I should have the right to wear it wherever I like.”

Asked whether he would wear the T-shirt again, Mr Pratt replied: “I am wearing it now. If I get a written apology I will wear it in the city centre again.”

He continued: “It’s a bummer because I like the shirt, but I am trying to get citizenship but if I get a fine I can kiss citizenship goodbye.”

Excellent outdoor marketing campaign — Noodle Slurpers Dick Cheney on why America shouldn’t invade Iraq (1994)
We use cookies to ensure that we give you the best experience on our website. Find out moreI accept