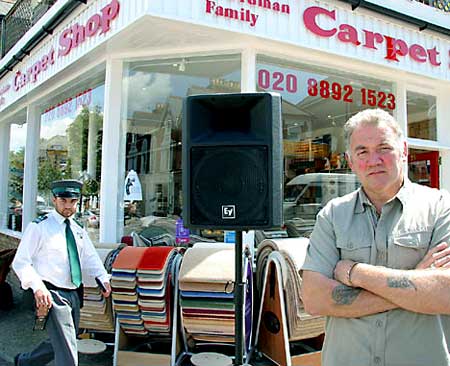 When traffic wardens started to blitz a quiet corner of suburban London, one shopkeeper decided it was his duty to fight back.

Martin Herdman put up a 1,000-watt public address system outside his shop near Twickenham and recruited a network of "spies" to alert him the instant they spotted a parking attendant in the area.

Then, as soon as the alarm was raised, he started playing a recording of a Second World War-style air raid siren over the system.

Mr Herdman's early warning system gives customers a chance to move their cars before they are ticketed by the warden.

The 50-year-old carpet shop owner and former part-time actor and musician said: "I put it up a few weeks ago. I get a phone call from other shop owners or residents whenever wardens are around, so everyone knows they are about to be nicked.

"It does work – it lets everyone know and then it's up to them if they get a fine or not."

Mr Herdman said that within a few days of his PA system starting, the number of wardens in the area had gone down, "although there were seven of them around this morning".

He said he had resorted to the "deterrent" because he feared trade at his shopping parade would be destroyed by over-zealous officers.

He said: "Richmond council put in 19 parking bays for the 39 shops on the parade. They are very busy, interesting shops that include art galleries and herbal clinics as well as butchers and cafés. It is a really useful, trendy place to go shopping.

"We have had roadworks for two months now that have knocked out five or six of the bays, but the wardens are still hounding the remaining bays.

"Now there is talk about turning the single yellow lines into double yellows, so there would be no parking at night as well."

He accused the Liberal Democrat-controlled council of favouring big supermarket chains such as Tesco, which has an Express store nearby.

Mr Herdman said: "If we ask the council for a loading bay for Crown Road, they would tell us to forget it but Tesco have got two loading bays in a road which is totally unsuitable for them."

He said that it was only fair his road should be allowed to have 39 parking bays so that each shop had access to one, particularly as supermarkets were routinely granted planning permission for huge free car parks.

Without urgent action, the traders would be driven out of business, leaving yet another corner of London bereft of the local independent shops that provide character

Mr Herdman said: "I shouldn't have to do things like this to get attention – I'm just trying to make it a better place for our customers and, hopefully, the council will come back with a sensible solution that will stop the decimation of our community.

David Trigg, Richmond's cabinet member for traffic, transport and parking, said: "Ideally, we would like to provide more parking for business but we have to juggle priorities.

"If we can benefit them that's what we will do."

The history of branding — click on a brand to learn its history Lost Van Gogh Work Found Under Boston Painting
We use cookies to ensure that we give you the best experience on our website. Find out moreI accept