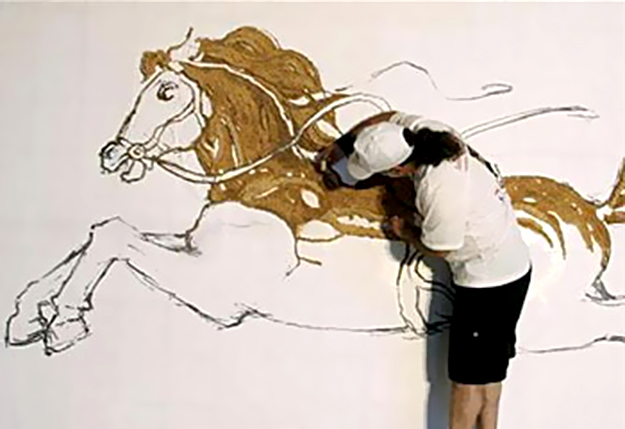 AN image of a horse created with more than half a million toothpicks in homage to Antoni Gaudi has earned Albanian artist Saimir Strati a second entry in the Guinness Records.

Strati spent 13 hours a day for 40 days on the mosaic measuring 2m by 4m in a technique resembling digital camera pixels, using either sharpened or blunt ends of oak, poplar and bamboo toothpicks.

He said the idea to produce the mosaic came to him while he tried to explain to a friend what La Sagrada Familia, the unfinished Barcelona cathedral of Spanish architect and artist Antoni Gaudi, looked like.

“I took some toothpicks from the table and opened them to show him how it looked like,” said Strati. “I named the horse ‘Reinless Spirit’ to honour Gaudi’s flight of genius.”

The mosaic was shown to the public in the round hall of Tirana’s pyramid-shaped culture centre.

Strati’s portrait of Leonardo da Vinci, the world’s largest mosaic of nails, is shown nearby.

Puppies and Flowers : Well mostly, 25 of The World’s Most Interesting Animals Monty Python Day or The Knights of Nee Festival