In fact, the rooster rides so well, Hanna named him Tony Chickenhawk 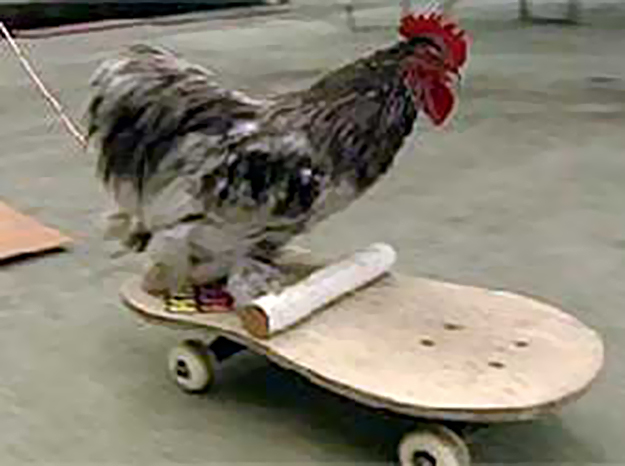 A controversy is brewing in this Cascade foothill town involving a famous bird on four wheels. Hanna Dahlquist’s pet rooster is one bird that’s got game. “He skateboards,” says Hanna. “He thinks he can go faster when he’s aerodynamic.”

In fact, the rooster rides so well, Hanna named him Tony Chickenhawk.

“I named him after Tony Hawk because he is like a really famous skateboarder and my chicken skateboards,” says Hanna.Tony has won an award at the King County Fair and has even received some ink in the local paper in this community known for its love of animals.

But now everyone is crowing about the celebrity rooster. Some in his neighborhood say he’s getting a bit too high profile, especially when they’re trying to sleep.

Tom Vaerewyck says the rooster wakes him up at 5:30 every morning. Vaerewyck, his son and son-in-law all live here and work graveyard. The rooster’s wake-up calls are more than just annoying to them. “I’m fighting to stay awake at work, the second half and just jittery and the drive home. I feel like I’m just ready to nod off. I feel that’s not safe at all,” says Tom.

Vaerewyck complained to King County, which threatened the Dahlquists with 90 days in jail and a $1,000 fine if the bird doesn’t clam up. The family has put a foam buffer up around the coop, and while Tony Chickenhawk continues his training for next year’s county fair, Hannah hopes her neighbors will just roll with it.

A spokesman for King County Animal Control says the agency hopes to be able to mediate a solution between the two families.

After one year, the code atop of an Adobe Inc. building is cracked BET’s ‘Read a Book’ racist rap profanity laced PSA
We use cookies to ensure that we give you the best experience on our website. Find out moreI accept