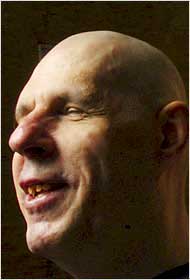 From (see Link below):

Joybubbles (the legal name of the former Joe Engressia since 1991), a blind genius with perfect pitch who accidentally found he could make free phone calls by whistling tones and went on to play a pivotal role in the 1970s subculture of “phone phreaks,” died on Aug. 8 in Minneapolis.

He was 58, though he had chosen in 1988 to remain 5 forever, and had the toys and teddy bears to prove it. The cause of death has not been determined, said Steven Gibb, a friend and the executor of the Joybubbles estate.

Joybubbles, who was blind at birth, was a famous part of what began as a scattered, socially awkward group of precocious teens and post-teens fascinated with exploring the phone system. It could then be seen as the world’s biggest, most complex, most interesting computer, and foiling the phone system passed for high-tech high jinks in the 1970s.

“It was the only game in town if you wanted to play with a computer,” said Phil Lapsley, who is writing a book on the phone phreaks. Later, other blind whistlers appeared, but in 1957, Joybubbles may have been the first person to whistle his way into the heart of Ma Bell.

Phreaks were precursors of today’s computer hackers, and, like some of them, Joybubbles ran afoul of the law. Not a few phreaks were computer pioneers, including Steve Jobs and Steve Wozniak, founders of Apple.

Joybubbles felt that being abused at a school for the blind and being pushed by his mother to live up to his 172 IQ had robbed him of childhood. So he amassed piles of toys, Jack and Jill magazines and imaginary friends, and he took a name he said made people smile.

But he never lost his ardor for phones, and old phone phreaks and younger would-have-beens kept calling. Joybubbles loved the phone company, reported problems he had illegally discovered and even said he had planned his own arrest on fraud charges to get a phone job. And so he did, twice.

Well before the mid-1970s, when digitalization ended the tone-based system, Joybubbles had stopped stealing calls. But he was already a legend: he had phoned around the world, talking into one phone and listening to himself on another.

In an article in Esquire in 1971, the writer Ron Rosenbaum called Joybubbles the catalyst uniting disparate phreaks. Particularly after news accounts of his suspension from college in 1968 and conviction in 1971 for phone violations, he became a nerve center of the movement.

“Every night he sits like a sightless spider in his little apartment receiving messages from every tendril of its web,” Rosenbaum wrote.

Josef Carl Engressia Jr. was born May 25, 1949, and moved often because his father was a school-picture photographer. At 4 or 5, he learned to dial by using the hookswitch like a telegraph key. Four years later, he discovered that he could disconnect a call by whistling. He found this out when he imitated a sound in the background on a long-distance call and the line cut off. It turned out that his whistle precisely replicated a crucial phone company signal, a 2,600-cycles-per-second tone.

Joybubbles’s parents had no phone for five years because of their son’s obsession. Later, his mother encouraged it by reading him technical books. His high school yearbook photo showed him in a phone booth.

By the time he was a student at the University of South Florida, Joybubbles was dialing toll-free or nonworking numbers to reach a distant switching point. Unbeknownst to telephone operators, he could use sounds to dial another number, free. He could then jump anywhere in the phone system. He was disconnected from college after being caught making calls for friends at $1 a call. In 1971, he moved to Memphis, where he was convicted of phone fraud. In Millington, Tenn., he was hired to clean phones, a job he hated. In 1975, he moved to Denver to ferret out problems in Mountain Bell’s network.

He tired of that and moved to Minneapolis on June 12, 1982, partly because that date’s numerical representation of 6-12 is the same as the city’s area code. He advertised for people yearning to discuss and weaved a web of phone lines to accommodate them. He lived on Social Security disability payments and part-time jobs like letting university agriculture researchers use his superb sense of smell to investigate how to control the odor of hog excrement.

Joybubbles is survived by his mother, Esther Engressia, and his sister, Toni Engressia, both of Homestead, Fla.

His second life as a youngster included becoming a minister in his own Church of Eternal Childhood and collecting tapes of every Mr. Rogers episode. When asked why Mr. Rogers mattered, he said: “When you’re playing and you’re just you, powerful things happen.”