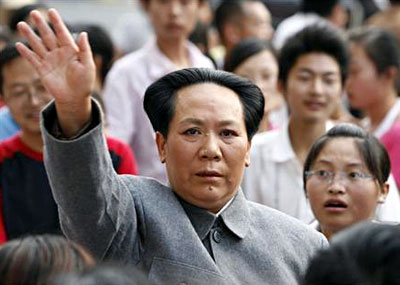 BEIJING (Reuters) – Chen Yan waves at a crowd of onlookers bemused at seeing China’s late helmsman, Mao Zedong, brought back to life by a middle-aged woman.
Chen, 51, from Mianyang, in China’s southwestern province of Sichuan, has been dressing up as Mao since she was discovered on a local TV show in 2005 impersonating another actor who had played Mao in movies.
Link to Reuters with more photos

Hermann Mejía’s artwork: illustration, painting and sculpture Large Waterspout off Singapore’s east coast
We use cookies to ensure that we give you the best experience on our website. Find out moreI accept