Pagans have a cow over Homer (guerilla marketing) 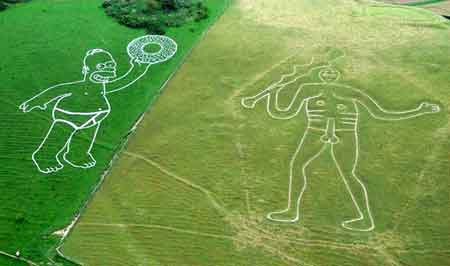 PAGANS have pledged to perform “rain magic” to wash away cartoon character Homer Simpson who was painted next to their famous fertility symbol – the Cerne Abbas giant.

The 17th century chalk outline of the naked, sexually aroused, club-wielding giant is believed by many to be a symbol of ancient spirituality.

Many couples also believe the 180ft giant, which is carved in the hillside above Cerne Abbas, Dorset, is an aid to fertility.

A giant 180ft Homer Simpson brandishing a doughnut was painted next to the well-endowed figure today in a publicity stunt to promote The Simpsons Movie released later this month.

It has been painted with water-based biodegradable paint which will wash away as soon as it rains.

Ann Bryn-Evans, joint Wessex district manager for The Pagan Federation, said: “It’s very disrespectful and not at all aesthetically pleasing.

“We were hoping for some dry weather but I think I have changed my mind. We’ll be doing some rain magic to bring the rain and wash it away.”

She added: “I’m amazed they got permission to do something so ridiculous. It’s an area of scientific interest.”

She also expressed fears that the painting of Homer, from the animated television series The Simpsons, would cause a mess as it washed away.

During the Second World War, he was disguised to prevent the Germans from using him as an aerial landmark.

Since then he has always been visible, receiving regular grass trimming and a full re-chalking every 25 years.