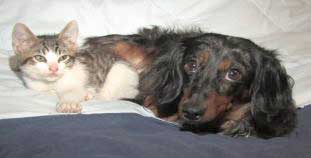 By all accounts, Tahoe is a typical kitten: cute, sleepy and hungry.

But his eating habits are far from typical, as the stray's been nursing from a 3-year-old dog named Lillie.

Ever since the kitten was found under the hood of Eunice Collins' running Chevrolet Tahoe a few weeks ago, he's been feeding from the unusually cooperative longhaired dachshund. Tahoe feeds in the morning, at night and after naps, pawing at the dog's belly.

"That's not going to happen very often," said veterinarian John Beck, who added that the "kitten got lucky, basically" that he found a dog with those maternal instincts.

Collins said she was confused by the sound of a kitten meowing as she drove her Tahoe.

"I thought I was going crazy," Collins said. "I came to a light and heard it again. So I pulled into a gas station."

Collins took the kitten in and kept him in a bedroom. Four days later, she saw Lillie feeding him.

"I couldn't believe it," she said. "She has just taken Tahoe on as her baby and has been nurturing and taking care of him. They're just very close."

Beck said having Tahoe in the house "induced a false pregnancy, a nursing response."

"It made the hormones needed to produce milk," Beck said. "Now, I'm sure the cat obviously had it in mind the dog was (his) mother."

Boredom, revenge and the other 235 reasons to have sex Pot dealers are now terrorists…
We use cookies to ensure that we give you the best experience on our website. Find out moreI accept