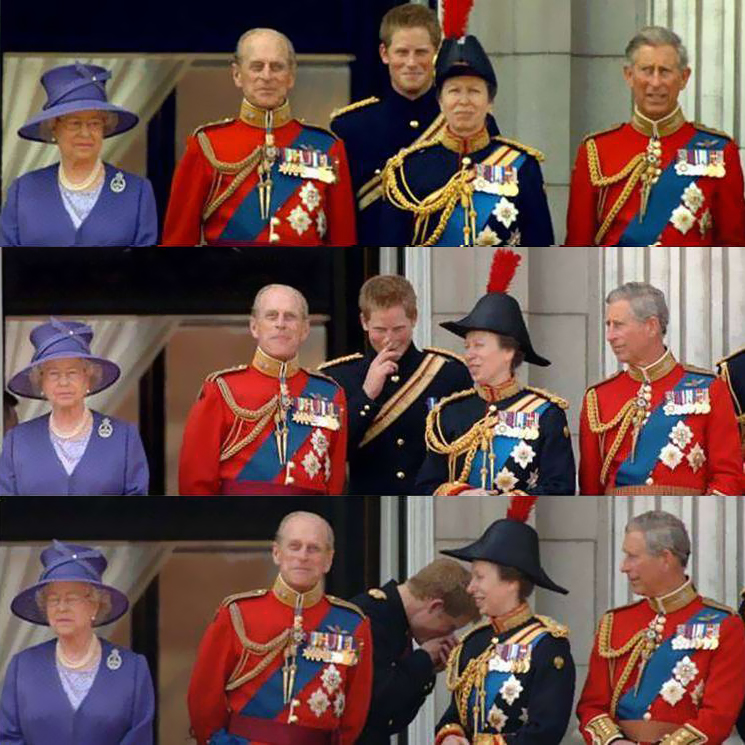 The pictures show what appears to be a possible “Fart” related incident on the balcony of Buckingham Palace, the “Trouser Tremor” seemingly dealt by the Daddy of them all, HRH Prince Philip, The Duke of Edinburgh. Have a look at the expressions on the faces of all concerned as the incident unfolds. In particular the Queens expression is priceless. Mr Methane

The Princes are practical jokers, here’s one they played on the Queen when she asked for help with her new answering machine:

Princely pranksters William and Harry have been accused of recording a bogus message on Queen Elizabeth II’s answering machine.  The pair were asked for help by their regal gran when she was baffled by the technology. But she was reported to be mortified when she heard the end result. “Hey wassup!” their message said. “This is Liz. Sorry I’m away from the throne.” “For a hotline to Philip, press one. For Charles, press two,” the recording continued. “And for the corgis, press three.”

According to The Daily Star, the Queen saw the funny side later when she thought about which VIPs might have heard the message. But her private secretary was not so amused. The paper says he almost fell off his chair the first time one of his calls was put through to the voicemail.

The Queen, who is 80, has been taught by Prince William and Prince Harry how to send text messages on her mobile phone. She was given her first mobile phone in 2001 by the Duke of York. But she banned servants at the royal palaces from carrying phones on duty, after becoming annoyed at their ring tones. The ban was reportedly prompted by several mobile phones ringing during a major banquet held for foreign dignitaries.

Guinness Marmite. That’s right. Guinness Marmite. House protects public broadcasting funding
We use cookies to ensure that we give you the best experience on our website. Find out moreI accept