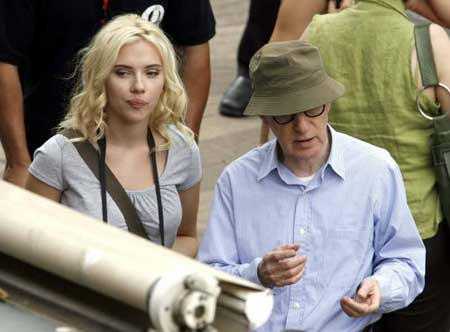 Shielded by bodyguards and away from the sight of curious beachgoers, Woody Allen started shooting his new film in Barcelona on Monday.

Allen shot some scenes at a restaurant in a fishermen’s neighborhood in Barcelona with actress Scarlett Johansson, who plays a tourist in the film.

The American film director and actor said last week at a news conference in Barcelona he hoped to create a portrait of the northeastern Spanish city on par with his 1979 masterpiece “Manhattan.”

The veteran director said he aimed to picture Barcelona “the same way I presented Manhattan to the world through my eyes.”

Barcelona would be the second European city to feature in a full-length Allen movie.

The film, yet to be named, is due to headline Johansson, Allen’s latest muse and star of his recent London-based films “Scoop” and “Matchpoint,” and Spanish actors Penelope Cruz and Javier Bardem.